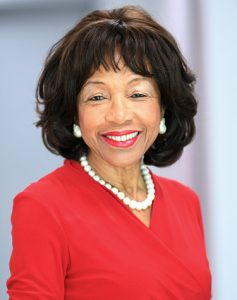 Lorna Smith O.B.E., M.A. TEP, is the Founder and President of LGS & Associates, a company dedicated to assisting its clients’ development and expansion of their business opportunities world-wide, including Caribbean Governments facing the challenges of globalization.

Lorna has several decades of experience at the highest levels of the public service in the British Virgin Islands and has spent the last decade supporting Caribbean Governments, corporations and individuals in various commercial ventures. She spent the last two and a half years establishing BVI Finance, a public private partnership devoted to business development and promotion of the financial services industry.

Over the course of her senior-level public service, Lorna has developed extensive relationships with leaders from the business community, international NGO’s and government leaders from around the world. She has been one of the key ‘engineers’ behind the BVI’s rise from relative obscurity to its present position as a top-flight tourist destination and one of the premier centres for global finance. Her unique experience and expertise serving as a facilitator between the public, private and non-profit worlds both within the BVI and between different nations gives her special insights into the challenges and opportunities facing organizations seeking to operate in the BVI and across the Caribbean.

From 1989 to 1997, Lorna served as Permanent Secretary to the Chief Minister, now renamed Premier. In this capacity, she oversaw the development and implementation of government policy, Lorna led an effort to modernize BVI tourism. Under her leadership, the BVI established itself as a premier high-end destination. In 1997, Lorna was featured in Travel Agents Magazine as one of most influential women in global travel.

In 1998, Lorna developed and oversaw the execution of an ambitious reform effort for the entire BVI public service. This far-reaching programme, developed with the support of Ernst & Young consultants, resulted in the establishment of a Department of Human Resources

Earlier, Lorna was called upon by the Chief Minister to manage the creation of the BVI’s first institution of higher education, the H. Lavity Stoutt Community College. Over the years, the college has become a vibrant centre of excellence in the region and one of the key drivers of progress in the Territory. For her years of service, including extensive fundraising, in 2000 she was awarded the highest honour given by the Board of Governors of the College.

In 2002, Lorna took the helm of the BVI International Finance Centre, which is charged with promoting the BVI’s Financial Services. She worked in close collaboration with the private sector, mounting promotional events in London, New York, Miami, Zurich, Geneva, Shanghai, Hong Kong and Singapore.

In 2016, Lorna was asked to return as the interim leader of BVI Finance due to a confluence of events, perhaps most pressingly the release of the Panama Papers by the International Consortium of Investigative Journalists (ICIJ) which would place the BVI’s financial services in severe jeopardy. At the same time, BVI Finance was transforming from a Government department to a Public/Private Partnership. Her interim post lasted two and a half years.

Lorna was also pivotal to getting the financial services industry restored in the aftermath of Hurricanes Irma & Maria through her leadership and communications skills.  She also played a vital role within Government especially on the interim Recovery Board as well as through the Rotary Club of Tortola where she raised significant sums to aid the recovery and to help the needy.

Lorna currently serves as a Director of two trust companies in the BVI and one bank based on her extensive knowledge of the financial services industry. She also chaired the Financial Services Business Development Committee, a largely private sector group charged with advisng Government on financial services policy. She is a regular speaker at various Financial Services conferences including the annual STEP Caribbean Conference.

Lorna has been invited by several BVI hotels including the Bitter End Yacht Club and Moorings Mariner Inn to conduct workshops for supervisors in improving productivity. She has facilitated similar workshops for Government over the years. In addition to her official duties, Lorna is an active member of the BVI community. She is a member of the Rotary Club of Tortola, having served as its President and is a triple Paul Harris Fellow. Her special areas of interest are supporting children with special needs, and youth development. Through a variety of fundraising events, Ms. Smith has also helped generate hundreds of thousands of dollars to support local charities. One fund raising effort during 2010 to assist the victims of the Haiti earthquake together with other Rotarians resulted in approximately $250,000 being raised in less than a week. In 2013 as Co Chair of an event the Club raised approximately $350,000.00.

Lorna earned her Bachelor’s degree from the University of the West Indies and a Masters in International Relations from the Fletcher School of Law and Diplomacy at Tufts University. She is also a qualified Trust and Estate Practitioner (TEP). In June of 2019 the Founder became a Fellow of the Institute of Chartered Secretaries (FCIS).

Get a FREE consultation with our experts